It felt like I was back in a time warp, then I was suddenly surrounded by Zombies. 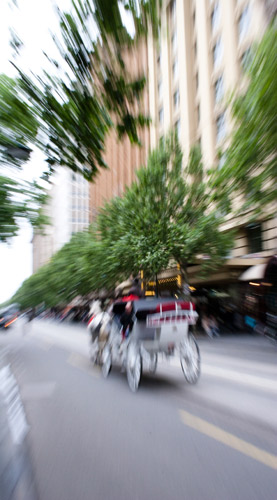 Today I walked among thousands of Zombies, they were every where, they were slow-moving with a sort of shuffling gait, you could just manage to get away from them if you tried very hard, it was just the sheer number of them that was totally overwhelming, I was able to walk among them as I had dressed myself in similar fashion and when they screamed I screamed as well, they chanted one word over and over again & again – Brains, Brains, Brainssss. 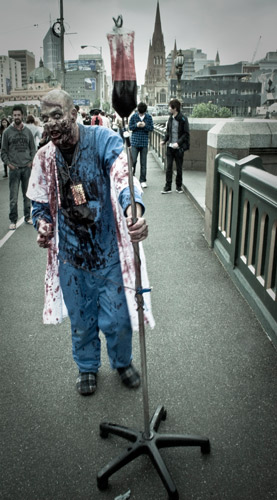 These are my friends starting from the left.

Heather along with friend Rex, his son Daniel, & his daughter Jessica, drove us in costume to car parking close to the city; we then caught a tram into the city & onto the start of the event, which started at Carlton Gardens. Even though we were running late it didn’t seem to matter as the thousands of Zombies that were on the march, were as the name suggests just shuffling along, we soon caught up with them. & I was soon happily snapping photo after photo. There was so much to focus on with Zombies & Ghouls of different types shapes & sizes with things sticking out here and there & a few things sticking in eyes & bodies and such, we wound our way through the streets of Melbourne, passing many landmarks, & Buildings, on towards our final destination, Alexandra Gardens. 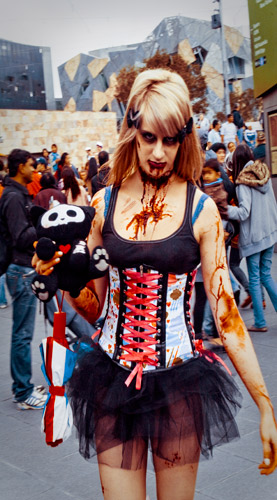 There were Bride Zombies, Child Zombies, Construction Zombies, Ghouls of every description lets face it, if you think of how a Zombie should look running through your BRAINS!!!! Then one of those was there too. 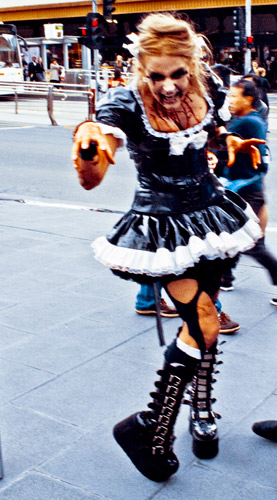 There not here to ride the Trains.

They just want to eat your Brains.

Sometimes when you least expect it, you see ghosts as well as Zombies.

Creeping around the cemeteries even in the daylight can be a scary thing to do.

Im sure I don’t want to bump into things, or have them bump into me.

Try not to panic or to strain.

What a fantastic event.

So I say Kudos to all the event organizers they did a fantastic job along with all the necessary yet very helpful authorities and to everyone needed to look after this many Zombies in one place.

To all of the Zombies that took part I say Kudos to all. There were some really outstanding looking Zombies throughout the shuffle. Every single Zombie in the Melbourne Zombie Shuffle looked fantastic. With so many people taking photos. It was a credit that no one lost their temper and all the participants showed great patience, allowing photograph after photograph to be taken of each and every Zombie.

Thanks for the memories Zombies of Melbourne you made my 2011

3 comments on “Zombies Are Rampant in Australia”